Beneath the grounds of Evergreen Cemetery  80,000  stories are waiting to be told. Many of those secrets are easily discovered.  Others take a little bit more digging and may prove more elusive than we planned.
While researching burials during the 1930's, I discovered  Charles H. Pratt who died in 1930. He is buried with his son, Eugene Pratt who died in 1939. Eugene Pratt served during WWI and has a Veterans stone. 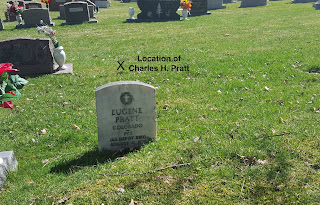 His father, who rests behind him also served in the military, but unfortunately is
unmarked.

Charles H. Pratt enlisted on March 12, 1875 and was discharged on April 6th, 1881. He served in the 10th US Cavalry. What makes Mr.  Pratt so unique and so special is he was a Buffalo Soldier. Sharing the history of the Buffalo Soldiers has been an  integral part of Evergreen Cemetery Benevolent Society events for many years. Each Memorial Day the local 10th US Cavalry Buffalo Soldiers pay tribute to George H. Mason, who served during the Spanish American War. 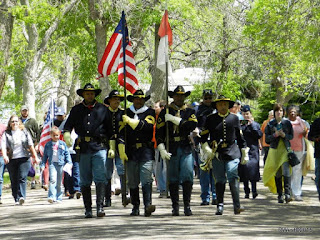 To obtain a headstone for Mr. Pratt, proof of his service must be documented. The NARA (National Archives Records Administration)  requests detailed documentation.  Colorado Veterans Grave Registration was submitted, however, it is not considered the necessary information needed to prove his military service. After speaking with numerous sources both in Colorado as well as in Washington DC, and running into brick walls, we are sharing this story , in hopes, a descendant of Mr. Pratt, will be able to provide the necessary information we need to be able to place a VA marker on his grave.

Following is the Pratt Family information.
Charles H. Pratt   DOB  1858 Maryland. He is listed as a Mulatto- he worked as a barber in a local hotel

Bettie Pratt (wife) was born in Missouri in 1865-she is listed as a dressmaker. Her parents were both born in Virginia.

Mr. Pratt and his family lived in Colorado Springs for many years.

It was our plan for this Memorial Day to honor Mr. Charles H. Pratt with an unveiling of his Veteran's Marker. He has lied unmarked for 86 years.

Please help us locate Mr. Pratt's family by sharing this story.
Please contact us via email at
evergreencemeterysociety@yahoo.com
Posted by Dianne Hartshorn at 11:38 AM

Hello, I am writing to see if you were able to prove Mr Pratts service and get a headstone for him yet? Also can you tell me if his son Eugene Pratt was a Buffalo Soldier also?