"I do not fear man or devil; it is not in my blood, and if they can shoot any straighter or quicker than I, let them try it, for a .44 equalizes frail women and brute men, and all women ought to be able to protect themselves against such ruffians."
"Captain Jack" 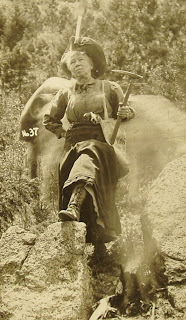 Ellen Jack had to be the best self promoter of her time. Living today, she would have had a FaceBook Page, A My Space account and could Twitter all day long. Who really was this lady behind the persona of a rough and tumble women of the west?

Ellen Jack was born in New Lentern, Nottingham, England in 1842. As a young child, the queen of a band of Gypsy’s, who had camped on the family estate, prophesied  Ellen was a  “Rosicrucian" a finder of hidden treasures. A beautiful young lady, with flowing blond hair, Ellen had no shortage of beaus, vying to win her hand in marriage. Her heart was given to her first love, Carl, a Russian. In a fit of jealous rage, stabbed her several times in the chest, after spying her with another man, unknown to him, was her cousin. Her sister insisted she take a trip to the US as a change of scenery would do her good. Aboard  ship, she met the handsome and dashing  Charles E. Jack. They were soon wed. A beautiful family and a happy marriage assured Ellen a fairy tale ending, however, that was not to be. Her children died within a short amount of time of each other. Her husband,  in time, succumbed to the injuries he  received in the Civil War. 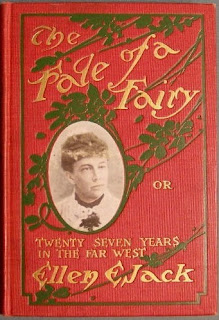 By happenstance an encounter with her children’s former nanny, Jennie, changed Ellen’s life. Jenny, now a prosperous working woman  encouraged Ellen to head west,  to Gunnison Colorado. In Gunnison she opened an eating house, “Jack’s Cabin", which proved to be quite profitable. The Indians, at the time, did not take to being pushed off their ancestral land. Collarow(sic) a well known renegade  and several others,  decided to storm the town of Gunnison. As the Indians were taking the town, Ellen stood her ground,  firing her 45s, even though she was bleeding profusely from a hatchet wound to the forehead.  It was Collarow himself, who rode into town, under a white flag to save the Pale Face, suffering from the poisoned hatchet. These fantastic stories must be true, after all, Ellen wrote them all down in her autobiography, The Fate of A Fairy or Twenty Seven Years in the Far West.
Unfortunately, none of Ellen’s adventures in Colorado are captured in the book.

Ellen soon found herself in Colorado Springs. She located a much more prosperous commodity than gold.  She mined for tourists.

In the early 1900’s, High Drive was constructed as a scenic drive,  intersecting at Gold Camp Road and North Cheyenne Canyon, above Helen Hunt Falls. Hack drivers met the incoming trains, at the Denver and Rio Grande Depot, each competing for the business of these Eastern tourists  who wanted a Wild West experience. Ellen exploited the tourist’s gullibility. Outfitted in a simple cotton blouse, wool skirt with lace up boots, she accessorized with a mining pick, and a six shooter, tucked into her belt. Ellen posed for photo postcards she sold at Captain Jack’s Place.  She rented cabins, cooked up a delicious friend chicken dinner to those who braved the narrow winding road up High Drive. Quite the eccentric on her own, she lived with her pet burro, cats and parrots, often posing for photographs. Posing as a prospector could easily had been for publicity, however, one could only wonder. In a 1905 February 5th, Gazette Telegraph article, she claimed to have discovered a cave to rival that of Cave of the Winds. Whether that was true or not we may never know.
In 1920 a flood washed out the road to High Drive. Luckily, Ellen was in town at the time. Although not in the best of health, Ellen yearned to return to her beloved High Drive. Due to finances, the city decided not to go to expense of rebuilding the road.Ellen’s health deteriorated and she found herself confined to a hospital bed. She died on June 16, 1921. Leakage of the heart was listed as cause of death, however, those who knew her best, believed she died of a broken heart, unable to return to her beloved home.
Ellen Jack was buried by the Ladies of The Grand Army of the Republic. Her grave, in Evergreen Cemetery, faces High Drive.
Posted by Dianne Hartshorn at 8:20 AM 1 comment: