Flags for Our Soldiers-How You Can Help


Memorial Day, which falls on Monday, May 29 this year, has customarily been celebrated as a day on which those who died in active military service are remembered for their ultimate sacrifice.  Cemeteries around the country and the world have traditionally honored fallen veterans by placing American flags on individual graves.  That tradition has been observed for many years at Evergreen Cemetery, owned and operated by the City of Colorado Springs since 1875. 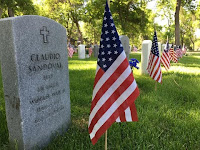 Over the years, many of the flags were generously donated by various community and civic groups, as well as by individuals from the local area.  Because of our city’s strong military presence, there are thousands of veteran gravesites within the cemetery.  The final resting places of military men and women who served their country from the Civil War up to the present are represented.  This year, the cemetery, which has never been financially responsible for providing the flags, is asking for the community’s help to provide flags for our veterans’ graves.

Donations are being sought to purchase the 8” X 12” flags locally. A goal to raise $1000 has been set, which will purchase approximately 1,500 flags.  If you, your civic and community groups, as well as corporate entities and private companies would like to donate for this tribute to our fallen warriors, contributions would be gratefully accepted.  If you are interested in donating time to place the flags on veteran’s graves, your help would also be welcomed.  Each year, flags that have been placed are removed by volunteers, and those in acceptable condition are reused the following year.

Posted by Dianne Hartshorn at 6:43 AM No comments: