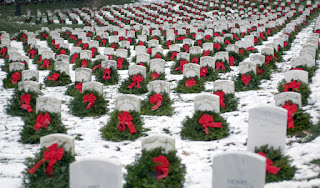 Please select your cemetery of choice from the menu at the top of the page! 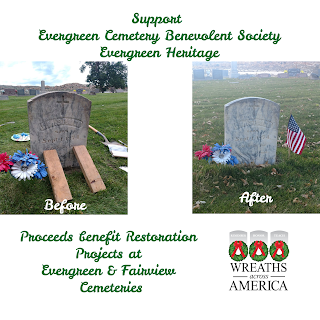 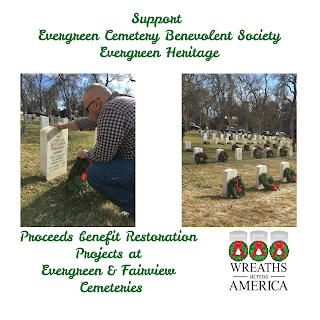 Posted by Dianne Hartshorn at 8:05 AM No comments:

Please select your cemetery of choice from the menu at the top of the page!

REMEMBER the Fallen. . . HONOR those who Serve. . . TEACH our children the value of Freedom.

Posted by Dianne Hartshorn at 3:46 PM No comments: 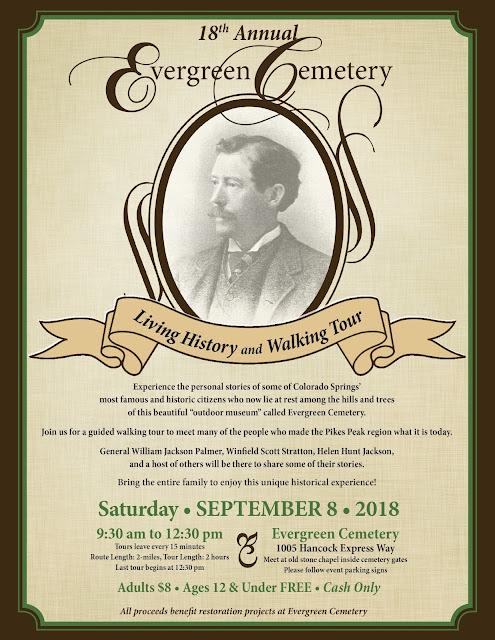 Posted by Dianne Hartshorn at 12:58 PM No comments:

The tour is over 2 miles and will take approximately two hours.

Proceeds from this event benefit preservation projects at Evergreen and Fairview Cemeteries.For

For more information please call Evergreen Cemetery at 385-6251
Posted by Dianne Hartshorn at 7:26 PM No comments:

One of our Colorado native and young war veterans, Bryan "Bud" Salladay. Bryan was born in 1896 and was #10 of 12 children born to Lounis and Victoria Salladay. They resided in Falcon, Colorado for a number of years then moved to Black Forest. At age 22, in April of 1918 he enlisted and was a Corporal in the U.S. Army. He was immediately sent to Ft. Lee in Virginia for training with the 349th Motor Supply Train, then on to France during the final months of World War I.
Here comes the history lesson...

100 years ago, in 1918, the world faced a pandemic called the Spanish Influenza (so called because reports of mass illness first appeared in Spanish newspapers The countries involved in the war didn’t want to announce the mass casualties from this illness because it would show weakness, Spain was a neutral country and was able to do so) Within months this flu had killed more people than any other illness in recorded history. It struck fast and was indiscriminate. Unusually, it proved deadliest to healthy young adults, with nearly half of all deaths striking those between the ages of 20-40 years old. In just one year the average life expectancy in America dropped by 12 years, according to the US National Archives.
This deadly illness took hold as World War I ended and killed an estimated 50 million people globally. By concentrating millions of troops, it created ideal circumstances for the development of more aggressive strains of the virus to be spread. Our Bryan contracted this flu and died on October 18, 1918... just 3 weeks shy of him seeing Armistice Day. This flu went on to kill almost *three times* more people than the 17 million soldiers and civilians killed during World War I.
Bryan was brought back after the War was over, along with 27 other boys from our region. His funeral was held at the lovely Evergreen Cemetery Chapel, on June 19, 1921. He's located in block 56.

Posted by Dianne Hartshorn at 12:27 PM No comments:

John and Aglaé were both born in France and married in May of 1886, when Aglaé was just 16 years old. They worked in a "Millinery Shop" that belonged to Aglae's parents there. After a fire destroyed the shop in 1889, they emigrated with her parents, to America. They first settled in Illinois, where John received his naturalization status (see photo.) Because of John's failing health due to working in the coal mines there, they moved on to Colorado Springs for a higher, clean climate. While living here, a friend of the family who ran the ANTLERS HOTEL kitchen and dining room took Aglaé under his wing, teaching her everything he knew about hotel dining room management and French culinary. John and Aglaé had 3 sons: John Jr, Norbert, and Louis. They lived at 1020 West Colorado Avenue, this home was built in 1897. (see photo)
Around 1908, John and Aglaé moved to Garden City, Kansas where John worked as a grounds landscape gardener and Aglaé managed the culinary department of Garden City's Hotel Stone. She had a smart business sense and was remembered as a very kind and loving woman. She died just a few years later in 1916 at the age of 46, from an "intestinal obstruction" (see attached obituary) Even though she died in Kansas, we can only speculate that she viewed Colorado as her home and asked for her body to be buried here.
Their first born son, John Jr. married in 1911 (I've attached his wedding photo to this post due to its adorableness

😊) They're first child, George died at age 9 months of pneumonia in 1917, just months after his grandmother Aglaé and is buried next to her. John Jr. and his wife then moved to Garden City to be close to family.
John Sr. continued living in Kansas until his death in 1940 (age 74.) He had his funeral there in Kansas in the morning and his body was sent to our Evergreen Cemetery that afternoon to be buried next to his sweet wife.
They ended up having a large family with many grandchildren, however only John Sr., Aglaé and grandbaby George are buried here. They are in block E, with a lovely obelisk.

❤️ This is just part of one family's story and their adventurous spirit to leave their homeland in the hopes of finding a bigger and better dream to live
.

Posted by Dianne Hartshorn at 11:09 AM No comments:

The talented William J. Fink. Born in Pennsylvania in 1875. By 1900, he was a music teacher in Ohio and just a few years later in 1903 he moved with his family to Colorado Springs. He was a violinist and a violin teacher here and was a prominent musician in town. He was the director of Fink's Orchestra which played at the Burns Theatre and he was also director of the Antlers Hotel Orchestra for 25 years. Mr. Fink also directed Sunday concerts at Stratton Park. He certainly left a musical legacy for generations to come. He shared his gift which brought culture and entertainment to a new and growing city. May we always remember those who put their heart and soul into their occupation. He is buried at Evergreen in a lovely family plot.

Posted by Dianne Hartshorn at 11:02 AM No comments: 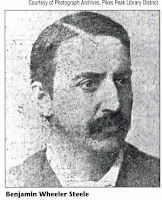 Colorado Springs Daily Gazette’s first publisher, Benjamin Wheeler Steele. Born in Massachusetts in 1851 to a family of old New England stock and Revolutionary War ancestry, he was proud of his ancestors and had a number of historical documents relating to their war efforts. As a boy, he saw his father and brothers go off to serve in the Civil War, some of them never to return. He was old enough to appreciate the stirring events of the times, and they left a strong impression on his mind. By age 14 he became a janitor of a four-room school to help pay for his education. Through perseverance, he also worked his way through graduation at Brown University. From a fellow student at Brown: "it was because of an explosion in the chemical laboratory that hemorrhages were brought on." He had begun to study law but left for our dear Colorado Springs instead to seek a healthier climate for his lungs. Upon arrival, Steele became an editor for the weekly Gazette, earning $8 per week. One year later, he was publishing the newspaper daily. Steele was popular with his employees. As noted in his eulogy, he took a warm, personal interest in his workmen, prizing faithful service and honoring those who gave it. He was level-headed, possessed good judgment, kind, and good-humored. He was known for his fairness and ability to see all sides of the issue. One senator reportedly said he possessed the strongest intellect in the state. His health declined quickly, and he was only able to rise from his bed for formal functions. 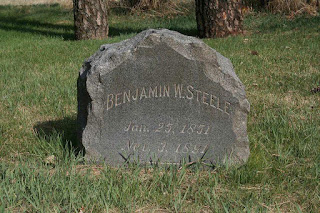 The last two months of his life were spent bedridden, but he continued to transact business until the end in 1891, at only 40 years old. From the Gazette: By his final years, he had become a thorough student of the war and had a complete library of war literature. The old soldiers of our city have cause to remember him very kindly because of the great interest he took in all that pertained to them. His final resting place is in a lovely shady spot in block 34 of our Evergreen Cemetery. ❤️


A decade after his death, when the community's growth and wealth had warranted a new elementary 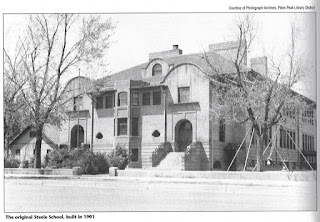 school, the Pikes Peak Press Club suggested it be named after Mr. Steele. And so, the beautiful new school at the northwest corner of Del Norte and Weber streets was named Steele School. This honor befits the man who gave so much of himself to the Colorado Springs community. The school was rebuilt in 1972 and is now a part of School District 11. 😊 Big thanks to ppld.org for having a great selection of information from their digital collection.
Posted by Dianne Hartshorn at 10:12 AM No comments: 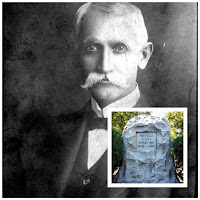 American prospector and philanthropist, Winfield Scott Stratton (1848–1902) He became  Cripple Creek district's first millionaire in 1894. Not only was Stratton rich, he was generous. After the Cripple Creek fire of 1896, Stratton paid for food and shelter for the thousands left homeless by the fire. 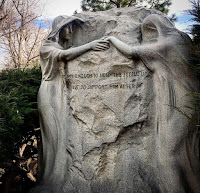 When Stratton died, he left the bulk of his estate for the establishment of the Myron Stratton Home, for "the aged poor and dependent children;" named for his father Myron Stratton, which sits on over 100 acres and is still in use today, mainly for the elderly.
Stratton's other legacies include a trolley system connecting Colorado Springs and Manitou Springs; the ground on which the current Colorado Springs City Hall stands; and money to complete the Short Line railroad.
He is a fine example to each of us of kindness towards strangers who are in need of the extra help and encouragement. He is buried in our local Evergreen Cemetery along with this gorgeous stone marker.
Posted by Dianne Hartshorn at 10:35 AM No comments:

Support While You Shop