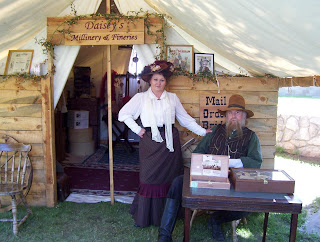 The streets of this place are the safest in this town. The residents are quiet, respectful, and eternal. The well trimmed lawns and the tall, aged trees give the area a cool and calming effect. The combined experiences of the oldest and youngest here would fill many book volumes and still some stories would be missed.
A well dressed and dignified man lives at a corner. His travels back and forth from Cripple Creek are well known and occasionally he stops to speak to visitors. He earned a great fortune from his work, only to have others try to beg it from him. And so this well spoken man recluses himself from public view.
Another resident walks down the street. She is a little eccentric in her life but a fixture of the area. Her burro, Jack, is her calm companion as she visits with others of her generation. The stories she has told! She even published a book. "The Fate of a Fairy". This chronicled her life as she immigrated from Europe to the United States.
A mother and young woman stand near another corner. The two are close as family comes. Their lives have been full of this world's miseries and joys yet they speak to passersby like old friends. The mother learned many skills from her mother and now seeks to pass that knowledge on to her daughter. The younger generation is so hard to convince at times. The industrial era has brought so many easier advantages.
On the seedier side of town sits a man at a table. This is not just any table. Many do not like his profession but Luke stays until his welcome is gone. He is a drifter and a gambler. He loves a game of cards and chance and he loves to deal in an extra hand when someone stops by. His swarthy good looks and charm make him popular with some of the ladies in town. Even now he sits and waits under a cool shady spot.
Farther down still is a writer. Her novels raised much attention in her time. She is fun loving and impishish but very much a lady. She is a celebrity in these parts. She is passionate about her causes and of her profession. Many visitors come to her home each year and even now her passionate speeches and writings are celebrated.
The neighbor down the road is ill. She has been bedridden for months. The doctors told her a cure might be found in the high altitude of Colorado Springs. The sun is almost year round here and allows for full exposure, even in the coldest of winter. Her illness has already claimed many lives but the doctors have hope and new cures are on the horizon. Florence takes most of her day sitting under a tree with the sun at her face. and the smell of fresh cut grass wafting in the air. The rolling grasses in the meadow close by offer a hunting ground for a Great Horned Owl.
Up the street works a craftsman. His trade is skilled and specialized. Peter is meticulous in his work and evidence of his talents are all over town. He sits quietly at his table and works on his latest project. He is always eager to show off his creations and secure business. His is a dying profession.
Around the corner are two characters that read straight out of a novel. He was a rough and tumble tradesman that earned his living by travelling over the road. He transported loads of lumber, dry goods, rail ties, and much more. The dangers of theft and violence were always there but he took the risk because it gave him freedom and he wasn't tied down. That was until Daisey came along. She was a single woman who had travelled out here to start a new life. Her hat business was thriving but she needed someone in her life. She set her sights on him. The rest is history.
A resident not far from Daisey is somewhat of a rebel. She frequently stands at a street corner with a protest banner. She believes deeply in her cause. She has been spat at; called names, and assaulted for standing up for herself and other women. Some refer to her as a "Ironed Jawed Angel". Time will tell if she is remembered. She rarely speaks but her husband engages for her when he is able to stand with her. He is also seen as a menace by many of high society that prefer to keep things as they are.
Where is this neighborhood? Evergreen Cemetery at 1005 S. Hancock Ave. just south and east of Fountain Blvd and Hancock Ave. in Colorado Springs. The 2010 Annual Walking Tour will be held on September 18th from 10am to 1:00pm. The last tickets will be sold at 1pm. Costumed characters representing many pioneers from the area will be on hand to talk about their times and lives. The chapel will also be open and tours included. The tour is self guided and will wind through the old areas of the property. Admission is $10 per person. Ages 12 and under are free. Proceeds will be used for conservation efforts in the cemetery. Bring your walking shoes!!! The residents look forward to your visit!

Posted by Dianne Hartshorn at 5:46 PM